The Two-Minute Rule for Beating Procrastination 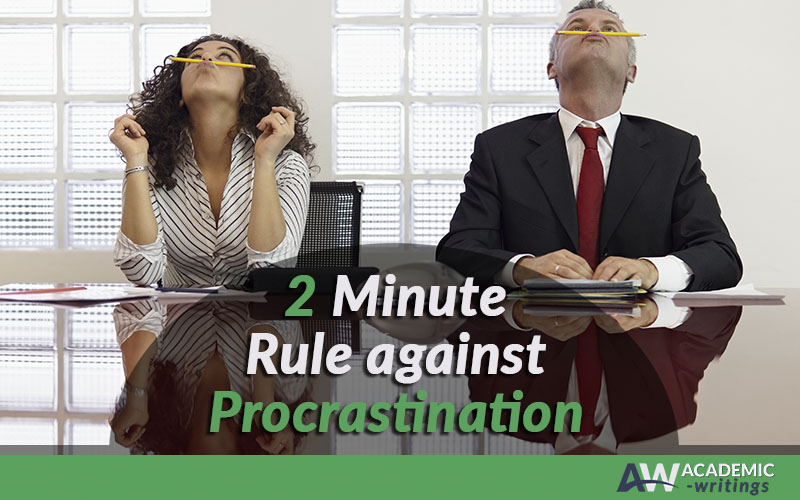 The feeling of procrastination appears when you avoid doing things that are necessary to be done. In reality, the daunting tasks come across a lot more challenging than they actually are. In most cases, the stage that we find the most difficult is getting started.

In order to make the first step, consider the two-minute rule that consists of two parts.

Take into account that many simple tasks you put off daily can be accomplished in less than two minutes. Such chores as answering an email that has been lingering in your inbox, loading the dishwasher or taking out the trash are a part of your daily routine and yet can bring about disorder in your life when ignored.

So, the rule is to do the work immediately if you know that it won’t take more than two minutes. You spend little time, but feel satisfied after it’s done.

The second part should be definitely clarified. We all set our personal goals, and very often, procrastination is what holds up back from accomplishing them. Obviously, any goal can’t be achieved in that short period of time. However, each can be started. Don’t agree? It all comes down to physics.

We all know the first law of motion – objects in motion stay in motion. This is also applicable to humans because once you’ve broken the barrier and started moving toward the aim, it’s easier to keep going. As a result, even the biggest life goal begins with a two-minute action.

Want to start working out? Begin with a two-minute long warm up, and you’ll find it easier to continue once your muscles have adjusted.

Need to write an essay? Write the first sentence and you’ll get the starting point.

Want to get into reading? Read the first page and get captivated by the story.

The way to achieving a goal or developing a new habit is not in performing it but starting consistently. It refers not only to starting from scratch but also to getting back to it any other day after some progress has been made before.

As you can see, the two-minute rule doesn’t focus on the ultimate result but on making an effort instead. This tactic is suitable for people who like to plan each action by dividing it into small tasks. By doing so, they conquer small summits every day on their way to the top.

We cannot promise that the two-second rule will fit your lifestyle. One thing that is obvious is that it won’t work unless you give it a go. After all, it’s just 120 seconds.